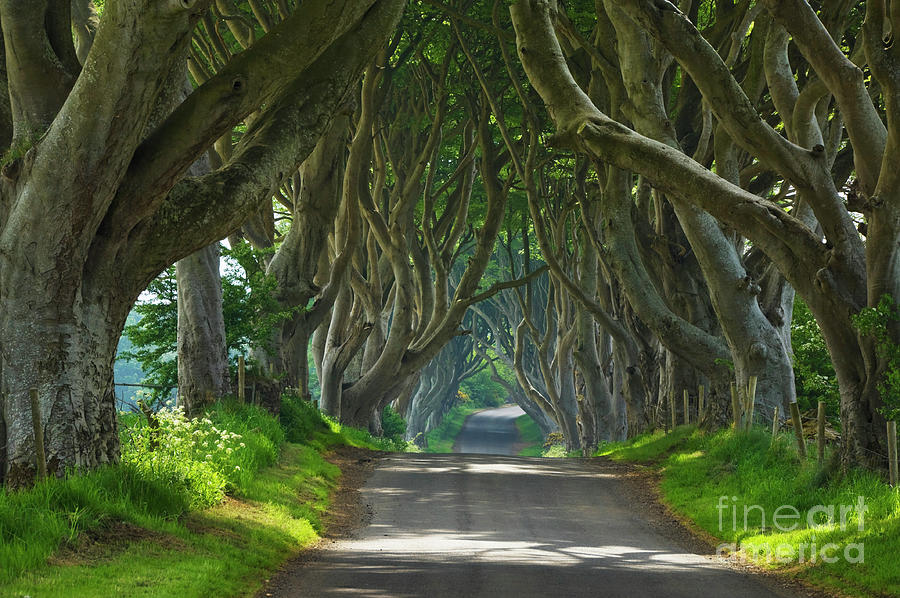 The Dark Hedges is an avenue of beech trees along Bregagh Road between Armoy and Stranocum in County Antrim, Northern Ireland. The trees form an atmospheric tunnel that has been used as a location in HBO's popular television series Game of Thrones, which has resulted in the avenue becoming a popular tourist attraction
This beautiful avenue of beech trees was planted by the Stuart family in the eighteenth century.
It was intended as a compelling landscape feature to impress visitors as they approached the entrance to their Georgian mansion, Gracehill House. Two centuries later, the trees remain a magnificent sight and have become one of the most photographed natural phenomena in Northern Ireland. In fact, the iconic trees have been used as a filming location in HBO's epic series Game of Thrones®, representing the Kingsroad.

Featured Scene: Season 2, Episode 1: The North Remembers - On the King's Road, Arya Stark has escaped from King’s Landing, disguised as a boy. She is with Yoren, Gendry, Hot Pie and others who are to join the Night’s Watch, in a cart, travelling north on the Kingsroad.
Bregagh Road is pedestrianised only now due to it popularity - no vehicles allowed