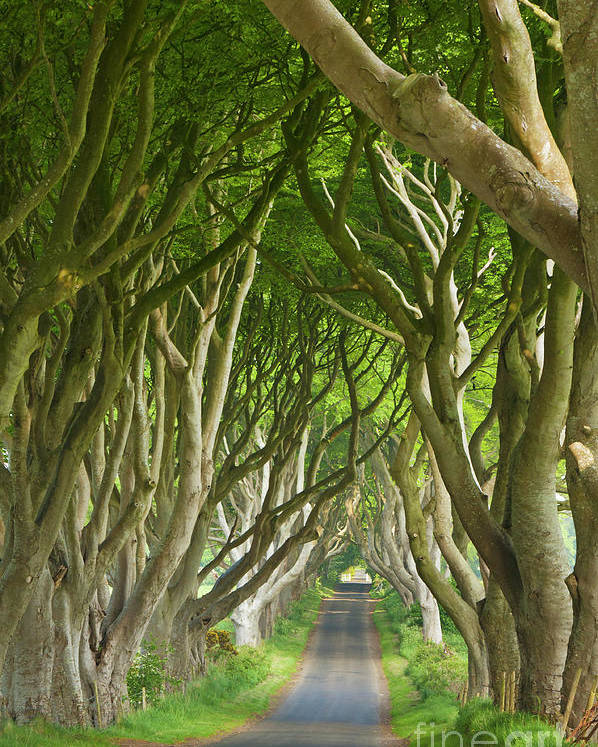 Dark Hedges, County Antrim, Northern Ireland poster by Neale And Judith Clark.   Our posters are produced on acid-free papers using archival inks to guarantee that they last a lifetime without fading or loss of color. All posters include a 1" white border around the image to allow for future framing and matting, if desired.

The Dark Hedges - this Beech tree lined road was a location used in the famous fictional series The Game of Thrones near Stanocum Ballymoney County... more

The Dark Hedges - this Beech tree lined road was a location used in the famous fictional series The Game of Thrones near Stanocum Ballymoney County Antrim Northern Ireland UK GB Europe The Dark Hedges is an avenue of beech trees along Bregagh Road between Armoy and Stranocum in County Antrim, Northern Ireland. The trees form an atmospheric tunnel that has been used as a location in HBO's popular television series Game of Thrones, which has resulted in the avenue becoming a popular tourist attraction The Dark Hedges were used as a filming location for the "King's Road" in the television series Game of Thrones. A tree preservation order was placed on the trees in 2004, to enable preservation and maintenance, and in 2009 the Dark Hedges Preservation Trust was set up. Of the 150 trees originally planted by the Stuart family, about 90 remained by 2016. A survey in 2014 revealed that the trees are in various states of health and are at risk in bad weather. Two trees were destroyed, and one...