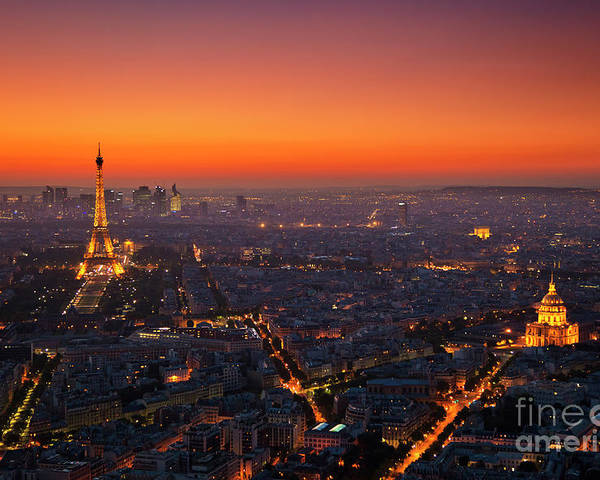 Paris Skyline at Sunset poster by Neale And Judith Clark.   Our posters are produced on acid-free papers using archival inks to guarantee that they last a lifetime without fading or loss of color. All posters include a 1" white border around the image to allow for future framing and matting, if desired.

Paris skyline at sunset showing the Eiffel tower and surrounding areas from the roof of Montparnasse Tower France... more

Paris skyline at sunset showing the Eiffel tower and surrounding areas from the roof of Montparnasse Tower France Paris is often referred to as the 'City of Light' (La Ville Lumière), both because of its leading role during the Age of Enlightenment and more literally because Paris was one of the first large European cities to use gas street lighting on a grand scale on its boulevards and monuments. Gas lights were installed on the Place du Carousel, Rue de Rivoli and Place Vendome in 1829. By 1857, the Grand boulevards were lit. By the 1860s, the boulevards and streets of Paris were illuminated by 56,000 gas lamps. This picture was taken from the Montparnasse Tower or Tour Maine-Montparnasse (Maine-Montparnasse Tower), also commonly named Tour Montparnasse, a 210-metre (689 ft) office skyscraper located in the Montparnasse area of Paris, France. Constructed from 1969 to 1973, it was the tallest skyscraper in France until 2011. It has a viewing platform on the rooftop which gives a sp...