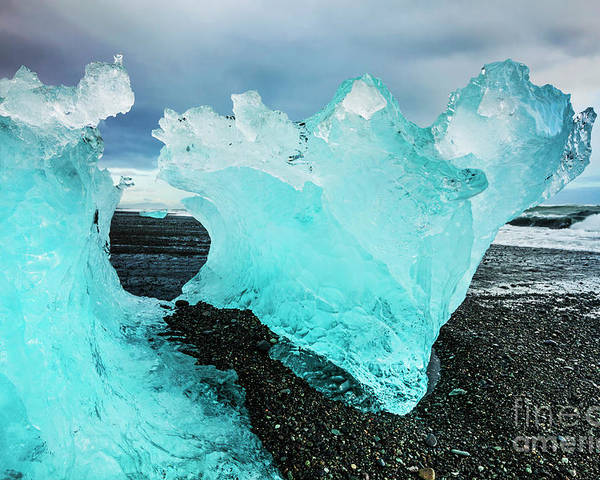 Icebergs on Jokulsarlon black beach, Iceland poster by Neale And Judith Clark.   Our posters are produced on acid-free papers using archival inks to guarantee that they last a lifetime without fading or loss of color. All posters include a 1" white border around the image to allow for future framing and matting, if desired.

Blue ice, black beach - A large Blue Iceberg on Jokulsarlon Black Beach Jokulsarlon Iceland Europe - this chunk of ice was chest high and whilst seeming innocent nearly finished us off - a rogue wave came unexpectedly close and dislodged the berg sending it toppling into Neale who was holding his camera and tripod to take a long exposure shot of the ice moving in the water - he fell backwards holding the camera and tripod above his head saving us hundreds of pounds/dollars in new equipment but earned himself a very cold bath! The icebergs that calve from the glacier edge move towards the river mouth and get entrenched at the bottom. The movement of the icebergs fluctuates with the tide currents, as well as being affected by wind. However, they start floating as icebergs when their size is small enough to drift to the sea. These icebergs are seen in two shades: milky white and bright blue, which depends on the air trapped within the ice and is an interplay of light and ice crystals. T...